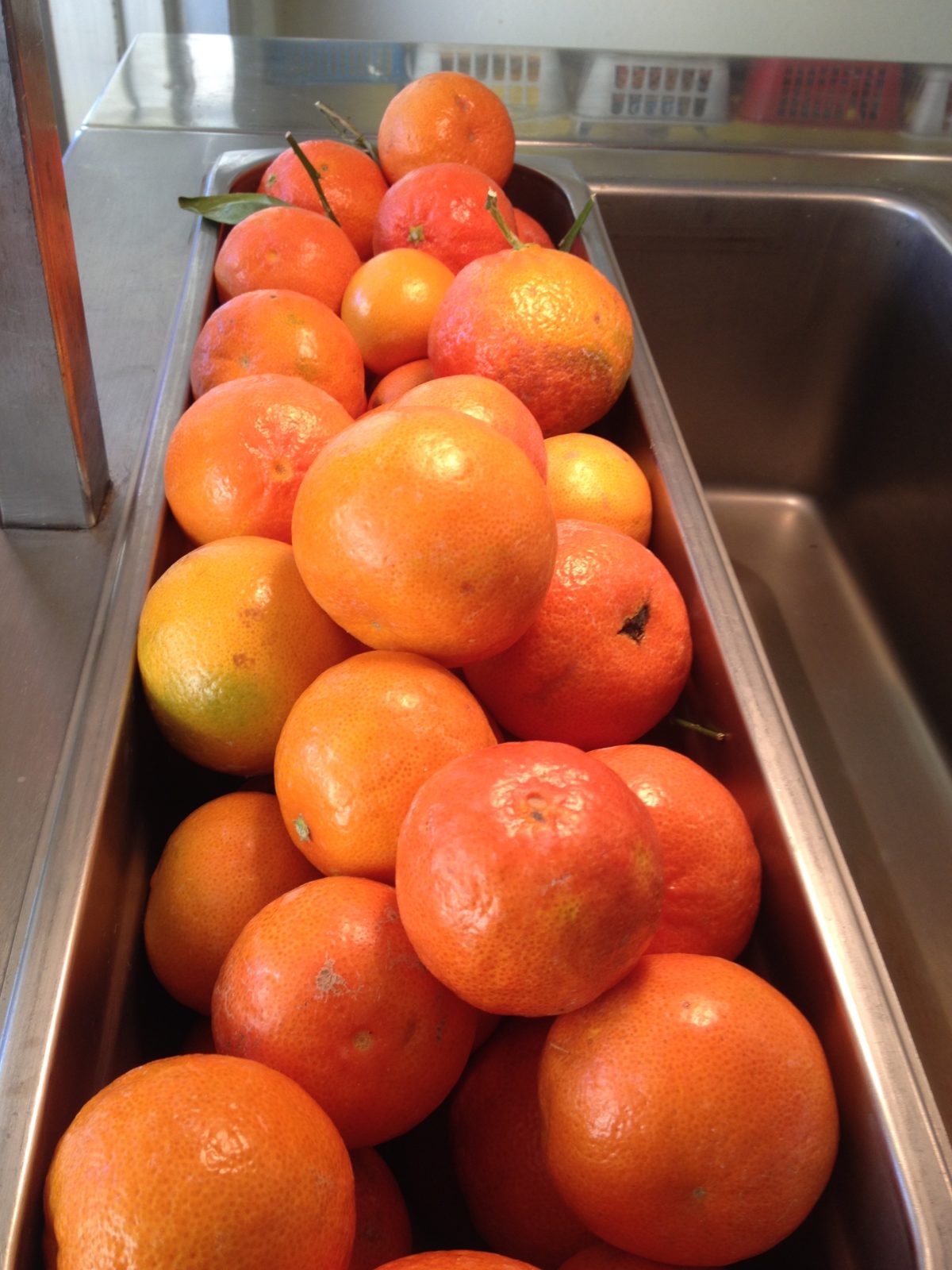 Ojai Lunch Monitor #2 Academic year 2015-16   Hello and welcome back to the Ojai Lunch monitor! I decided to eat my first school lunch of 2016 at Matilija Junior High on Tuesday February 2nd. On another beautiful sunny day of our so-far El Nino-less winter I signed in at the office and walked around the building to the lunch area. On the way I passed the water vending machine. I think it’s odd to be selling plastic bottles of water to kids when there are perfectly good free drinking fountains available, but I guess it’s better than selling soda pop or weird blue sports drinks. My understanding is that Food for Thought is working with the district to put in a “water station” that will dispense free, filtered, refrigerated water that will presumably be more popular than the usual drinking fountain fare. Meanwhile I just would like to know what that poor machine did to deserve being locked up like that in the scary looking metal box… 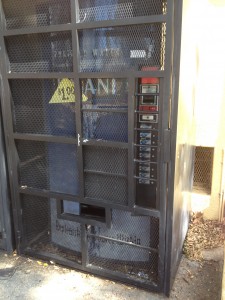 I arrived before the lunch bell rang, which turns out to be absolutely crucial (see below), and checked in with the Nutrition Services staff. As usual, they were extremely friendly and helpful. We had a nice chat about the health dangers of Flaming Hot Cheetos (ie: painful off-color diarrhea), an item which has thankfully recently been removed from the lunch offerings. As the conversation turned to why, exactly, I was there, I discovered that THEY HAD READ MY BLOG from December 2015! This was quite unnerving. Like any savvy restauranteur who sees the local food critic walking in the door, they proceeded to steer me towards the lunch offerings that were most likely to make for a good review on the basis of taste, appearance and (given Food for Thought’s mission) perceived healthfulness. There were some burritos that I had actually been intending to try, as well as an intriguing yet also undeniably repulsive pre-packaged item that I believe is supposed to be some form of hand-held Mac’N Cheese. Also they were offering deli sandwiches that I didn’t get a good look at. What I did walk away with was a beautiful chef’s salad with chicken. Also, there was a nice looking 3 bean salad that they wanted me to try. On the way to the cash register, as I was eyeing the chocolate chip cookies, I was encouraged to have a tangerine for dessert instead. 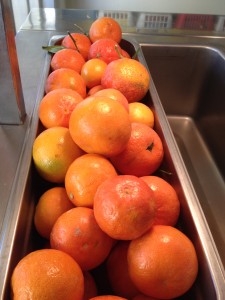 As I walked over to the picnic tables I was feeling a bit conflicted about ending up with a salad and fruit when I had been expecting a burrito and a cookie. I will have to be more assertive next month. At least there were croutons and a lot of Caesar dressing… 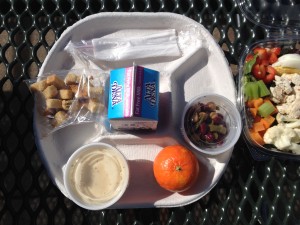 You will notice the new improved compostable tray which is, per staff, no longer difficult to separate! At this point I would like to congratulate nutrition services on resolving this issue so efficiently! If people in my industry could identify systemic problems and correct them as quickly, we would have achieved affordable health care in this country long ago. Also, the design solution of putting the spot for the milk in the middle makes the tray much more stable and easy to carry with one hand. As I unwrapped my flimsy spork and spread out my Kleenex/napkin, I felt at least encouraged that these too are perhaps not insurmountable obstacles to improving the school lunch experience. 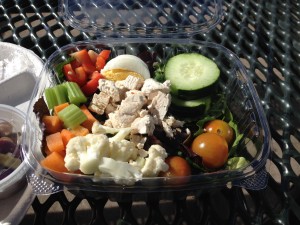 My salad was excellent. The veggies were fresh and the lettuce base was an impressive array of greens (and purples!) Oddly, despite being on the crunchy side, the tomatoes were quite sweet. The chicken was initially a bit dry, but it soaked up the Caesar dressing nicely. The 3 bean salad was also delicious. I couldn’t help wondering if my reportage of the difficulty I had finishing my unadorned chick peas from December had something to do with it. 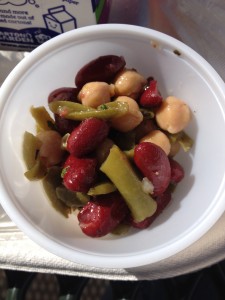 Also, my tangerine was yummy. At the end of my meal, I was quite full, but feeling rather carb-deprived. Unfortunately, I had to abandon my Plan B of going back for a cookie because by then the lunch bell had rung and the line to get food was snaking back and forth under the awning like the line for the Pirates of the Caribbean ride at Disneyland. I couldn’t help but wonder if the fact that they might spend the entire lunch period waiting in line might be a major deterrent to students buying school lunch. When the bell rang, I observed the kids streaming out of their classrooms, literally running, so they could start socializing. They very quickly assembled themselves into little groups, based, presumably, on different important characteristics that are entirely invisible to adults. I recalled Darwin’s finches: colonies of related but ultimately distinct species which to the untrained eye all look the same. Of course, none of the kids sat at the table I was occupying. I was hoping my daughter, who is an eighth grader, might stop by and say hello, but she was nowhere to be found. I checked with Mr. Ramirez, the avuncular park ranger/assistant principal who knows all the habits and ecologic niches of the different species, but apparently my daughter was not where she is usually to be found at lunchtime. Many of the kids did not appear to be eating lunch at all, being too busy goofing around. Others were eating food they had brought from home, most of which appeared to be of the Flaming Hot Cheetos and weird blue sports drink variety. I did see a few sandwiches, burritos and hand held Mac N Cheese things being carried around as people flitted from group to group. I didn’t see anyone else with a salad. The more I visit our schools at lunchtime, the more I see that food is only a part of the picture. I mainly became interested in the issue of improving the school lunch as a social justice issue: I would like the public school kids who don’t have the luxury of bringing a nice lunch from home to have a healthful and tasty cafeteria option. I would like the staff who are charged with feeding our kids to be appropriately respected and compensated. I realize now, however, that in our free market system, in order to survive and prosper, the school lunch also has to sell itself. It has to become a desired commodity. We have to make it convenient, affordable (which currently I think we are doing well at, my chef salad being about $4), as well as appealing. This might seem like a tall order, but I think it’s possible. If we can get kids to expect a great school lunch as elementary students, once they graduate to the higher grades and have more autonomy, I think they will choose the more healthful options. And hopefully, as adults, they will have internalized some good eating/living habits that will positively influence how the next generation interacts with our food production systems and the environment in general. For now, if we could just do something about the sporks, I would be super excited. Until next month… Helen Petroff FFTO Lunch Monitor