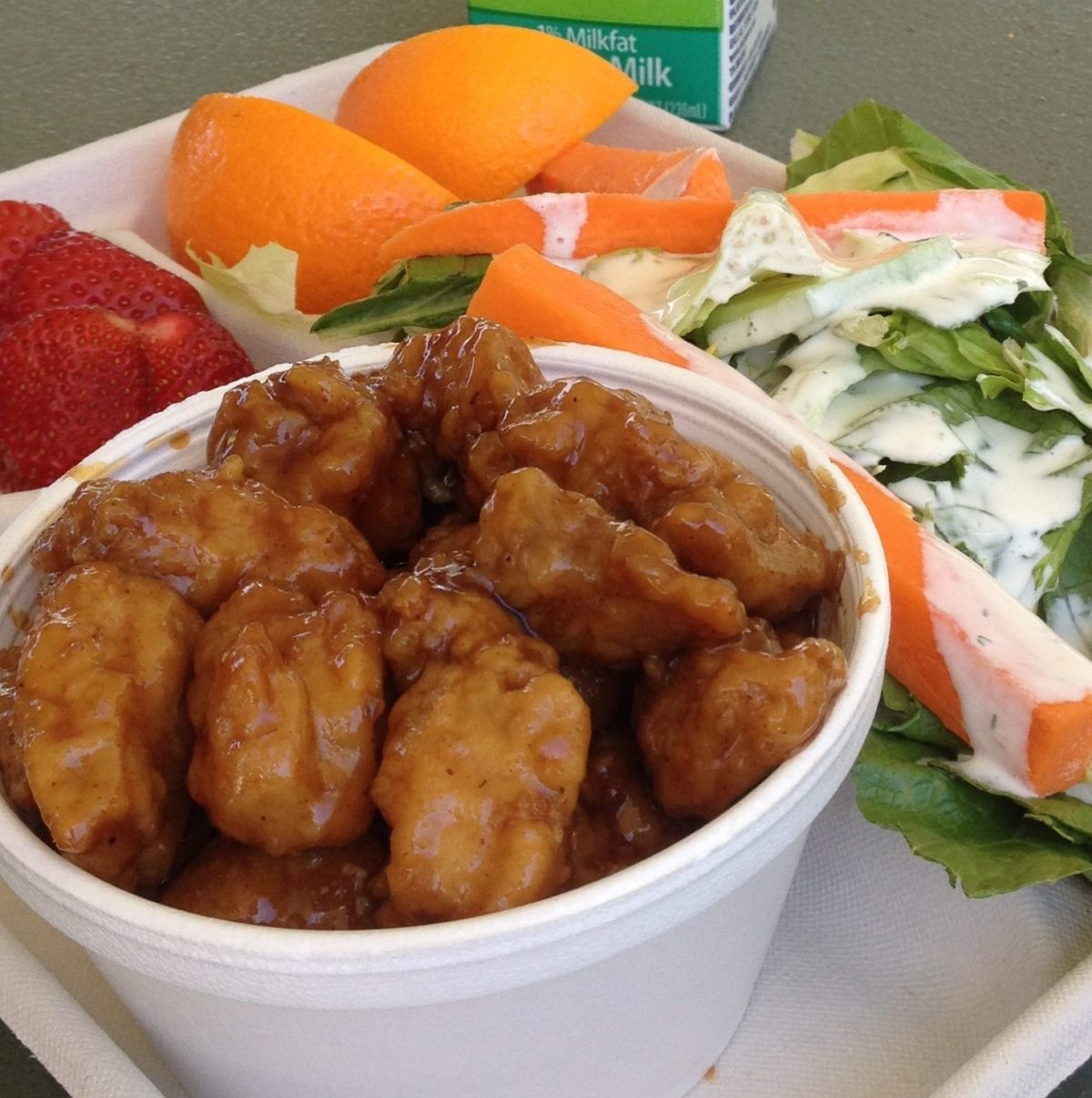 Hello and welcome back to the Ojai School Lunch Monitor! For my latest foray into the world of school lunch, I was joined by my friends and fellow Food for Thought Ojai board members Rico and Christina. We ate at Mira Monte School on March 29th.  We met up at the office and headed out to the cafeteria. What a difference having a couple friends around to eat lunch with makes! As I’ve been doing this for over a year now, I’ve become more comfortable wandering into the cafeterias of our local elementary schools. However, with my friends in tow, when the nutrition services staff greeted me with the usual friendly banter, I felt not only comfortable, but, dare I say it, even a little cool! 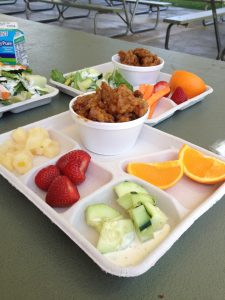 Like, I suspect, many little friends who are going around in a clique would do, we all got the same thing: orange chicken on brown rice.  This is a tasty entrée. I have had it before and it is one of my go-to, I know this will be edible choices. Apparently Christina’s son, who is a student at Mira Monte, has also identified it as a keeper. Interestingly, he now  has had an opportunity to let someone in a position of power (as opposed to just mom and mom’s friend the blogger) know this. My understanding is that the OUSD nutrition services department recently had the students fill out a survey about what they like and don’t like about school lunch.  This is a great idea! Who better to give feedback on your service than your customers? My orange chicken did not disappoint: it was tangy and mildly sweet with a good texture and not too much breading.  It went well with plain brown rice, but I do recall having had it last year over  chow mein noodles with veggies including broccoli in it. This was clearly a missed opportunity given that broccoli was the March Harvest of the month veggie!  But now I am being picky, not unlike the alleged children who won’t eat food that is touching other food. The strawberries and oranges were sweet and appropriately firm and juicy. The carrots not so much. They were rather waxy and more bendable than seems right. 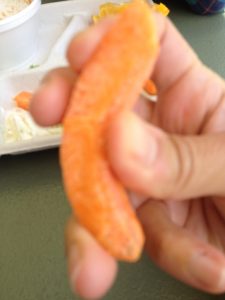 And of course there was romaine lettuce with ranch, the ranch being  home-made this time and quite tasty. I chose the cucumbers as my ranch-accompanying veggie, mainly to avoid the whole dispiriting spork/lettuce hassle. They were fresh and crunchy.  I finished off with some ok canned fruit cubes: pear, I believe.  My friends and I bussed our trays, took leave of eachother, and went back to our various presumably useful adult type activites.  I, for one, had a little more energy and enthusiasm after my nice sociable lunch. Until next month Helen Petroff Ojai School Lunch Monitor