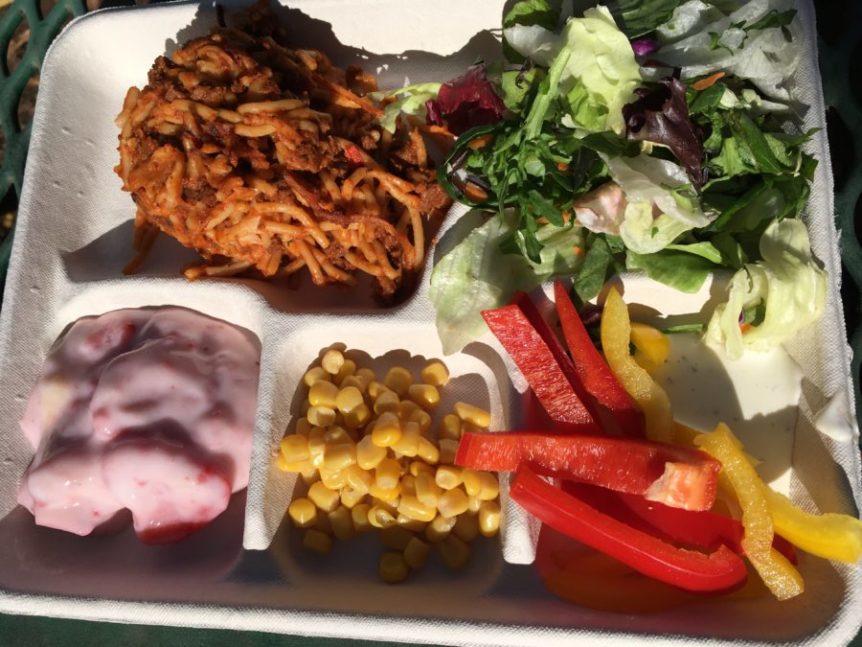 Hello and welcome back to School Lunch Confidential!

As I sit around listening to the rain pouring down (not complaining!) I finally have some time to share photos from a lunch that I ate at Topa Topa school on December 7th, 2018.  When I arrived at the cafeteria, a class of 3rd graders were patiently lined up waiting to get their trays. As I took my place at the back of the line I was informed that it was going to be a bit before the burritos that were on the menu were going to be ready. (I believe I have previously blogged in this space about my often Quixotic attempts to actually be served a lunch burrito by OUSD.) The kids and I were feeling a little frustrated until the nutrition services staff announced that there was pasta available right now if we wanted it. With a joyous cry of “PAS-GHETTI!” we all stepped up to be served.

In addition to the pasta entree, there was room temperature corn, fresh pepper slices, a nice mixed green salad and strawberry yogurt with frozen sliced strawberries in it.  Also there was flavored sparkling water which I like a lot but I didn’t see any of the kids drinking.

The pasta was appropriately soft (not mushy, not al dente) with a tasty marinara/meat sauce binder. I thought it benefitted from mixing in the corn. “PAS-GHETTI!” is a great example of a lunch staple that is widely accepted by children, yet can be customized to include vegetables, meatless options or flavor-enhancers like parmesan cheese, the lack of availability of which at OUSD elementary cafeterias I have repeatedly pointed out in this blog, apparently to no avail. So Kudos to the Topa Topa staff for an effective punt when, for whatever reason, the burrito was not going to happen on my watch.

I made a very credible salad out of my lettuce, peppers and ranch dressing. Unfortunately, Topa Topa is still in spork limbo which negatively affects the salad-enjoying experience. I believe some of the campuses are using actual metal forks and spoons which I am looking forward to seeing more widely adopted.

A word about the yogurt/strawberry (dare I say it?) dessert. It was good! A clever use of frozen sliced strawberries which kept the yogurt at the right temperature and were a welcome bit of sweetness. My only suggestion would be to use diced frozen strawberries instead (if such a thing exists) as chewing the frozen slices into a size that was safe to swallow made my fillings ache.

Off the record and uncensored,