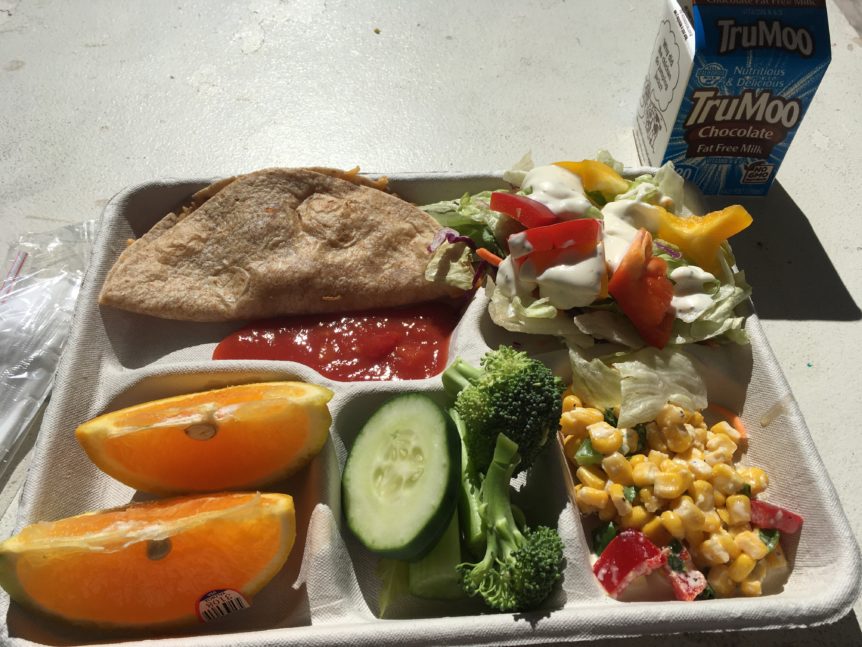 Hello and welcome back to School Lunch Confidential!

A Tale of Two Lunches: it was the best of lunches, it was the worst of lunches…  Actually I ate the not so great lunch first, so I will start there.  Late in the evening on October 14th, a gentleman affixed the following to my front door:

Honestly, it didn’t affect our morning routine at home that much: we just brushed our teeth with Pellegrino, and making coffee involves boiling water anyway, so the situation was not weighing heavily on my mind when I headed over to Topa Topa for lunch on October 15th.  The staff at the cafeteria, on the other hand, had very long faces and were quite apologetic about the lunch offering: not a good sign. It turns out that Topa Topa, being in my neighborhood, was also on the Boil Water Notice, and that this is a BIG problem for a commercial kitchen.  While at my house we were blithely adding capfuls of bleach to sink water and figuring that was good enough hygiene-wise, the folks at the Topa Topa kitchen were essentially prevented from doing ANY actual cooking/food prep, which resulted in the following lunch:

In order to describe this lunch, I would like to use the NOVA food classification system, which categorizes foods according to the extent and purpose of food processing.  This system is used by the World Health Organization and many other international agencies for research and policy recommendations about health and nutrition in the age of industrialized food.  There are lots of websites with information about NOVA: I used: https://world.openfoodfacts.org/nova for today’s rant, I mean blog.

So the bag of carrots was NOVA group 1. Oddly, I did not have ranch dressing to dip them in, not sure if it was missing or I just didn’t see it. Other than that, the carrots were fine. I ate the whole bag. This being said, several days after my lunch, one of my Food for Thought board colleagues who is a farmer told me some rather disturbing information about how “baby” carrots are made (turns out they are not young carrots at all but actually otherwise unsaleable chunks of big carrots with the edges worn down) so I don’t know if that will affect my enjoyment of them next time. TMI.

Moving right along…NOVA group 2 is “processed culinary ingredients” such as oils, butter, sugar and salt.  I rarely see any of these items available as an option to add to any of my lunches at OUSD, but I can understand from a crowd control standpoint how the noon supervisors would probably veto pats of butter or salt packets which could be used as projectiles.

NOVA group 3 is “processed foods” which are made essentially by adding salt, oil, sugar or other substances from Group 2 to Group 1 foods.  Processes include various preservation or cooking methods, and, in the case of breads and cheese, non-alcoholic fermentation. Most processed foods have two or three ingredients and are recognizable as modified versions of Group 1 foods.

Group 3 is what most of us would call “cooking” or the unfortunately necessary retronym “scratch cooking.” It is a sad comment on our industrial food system that we need a special term to distinguish “cooking food” from “cooking something that may or may not actually be food.” (More on this is a moment…)

While the ingredients list on the bag of carrots was “carrots” (this reminds me of the puzzling food labeling of bottled water which not surprisingly has zero calories), the ingredients on the dried cranberries included “Dried cranberries, Sugar, Sunflower Oil” making them NOVA group 3. I saved them for later and have stashed them next to the bag of Craisins in my pantry that I use on salads.

Similarly, the honey roasted sunflower seeds, which were quite tasty when I ate them for snack at my desk later in the day, would be a Group 3 “processed” food.  The purpose of processing here is to increase the durability of Group 1 foods, or to modify/enhance their sensory qualities (ie: taste).  The string cheese (a group 3 product of non-alcoholic fermentation) was fine and stringy.  And although there are those who would stamp out the scourge of chocolate milk in the school lunch, it does qualify as NOVA group 3 and I look forward to having it periodically (just not every single day, please).

Now we get to the problem: NOVA group 4. Group 4 includes ultra-processed foods, such as soft drinks, sweet or savory packaged snacks, reconstituted meat products and pre-prepared frozen dishes, which are not modified foods, but formulations made mostly or entirely from substances derived from foods and additives, with little if any intact Group 1 food.

Earlier this year there was a very sexy study published in the popular journal Cell Metabolism (sarcasm alert here) titled Ultra-Processed Diets Cause Excess Calorie Intake and Weight Gain: An Inpatient Randomized Controlled Trial of Ad Libitum Food Intake where 20 volunteers were randomized to receive either ultra-processed or unprocessed (ie: NOVA group 1&3) diets for 2 weeks immediately followed by the alternate diet for 2 weeks.  And guess what? When people ate the ultra-processed diet, they consumed more calories, their body fat percentage went up, and they gained weight. When they were on the “unprocessed” diet (which included plenty of scratch cooking), that trend was reversed.

Also, to quote the article verbatim with all the weird confusing statistical analysis, “Participants did not report significant differences in the pleasantness (4.8 ± 3.1; p = 0.13) or familiarity (2.7 ± 4.6; p = 0.57) of the meals between the ultra-processed and unprocessed diets as measured using 100-point visual analog scales. This suggests that the observed energy intake differences were not due to greater palatability or familiarity of the ultra-processed diet.”

So this is scientific evidence that we should not serve people pre-packaged ultra-processed food because they like it better, since they don’t actually, and besides, it appears to be contributing to the obesity epidemic. Here is a link to pictures of the actual food that people ate during the study, I found it fascinating:

Ok, now back to lunch…

The Graham Slam! (sic), being a formulation made mostly or entirely from substances derived from foods and additives, with no discernable intact Group 1 food, was clearly NOVA group 4.  Initially it was even kind of hard for me to fathom what type of food it was supposed to resemble. Mine was served cold, which made me think it was going to be like an ice cream sandwich, but after unwrapping it and reading the packaging more carefully, I determined it was more of a Frankenstein-on-steroids version of good ol’ PB & J.

Interestingly, while the Graham Slam! apparently is High Fructose Corn Syrup Free! (enough with the exclamation points already!), the lengthy ingredient list does include corn syrup (the non-high fructose variety I guess?) and something called Interesterified Soybean Oil, (with Distilled Mono Glycerides Added) which I am unfamiliar with, not surprisingly since I only got a B+ in organic chemistry.

I tried to eat it, I really did. But it was just too yucky, so I threw most of it away.

Why couldn’t they just have got out a big loaf of bread, some peanut butter and jelly and made a bunch of real PB&J sandwiches? I was spouting off indignantly and ignorantly about this at our Food For Thought board meeting a few days later when I learned from one of our board members who is a chef that what passes for hygiene at my house is woefully inadequate by commercial food safety standards. Apparently we were very lucky that the Boil Water Notice expired after 48 hours and that no one in my family got dysentery.

So, if there is an appropriate place for NOVA group 4 ultra-processed foods, it might be: 1) In space 2) in a war zone 3) during a Boil Water Notice.

What a difference a week makes! I went back to Topa Topa on October 22nd and had a very tasty scratch cooked “best of times” lunch. This has already been way too long and wordy a blog, so I will just let the photos speak for themselves:

For dessert, sweet (NOVA group 1) orange slices, not as easy to eat as a pixie, but pretty good for October!

And yes, I had the chocolate milk again…

Off the record and uncensored,