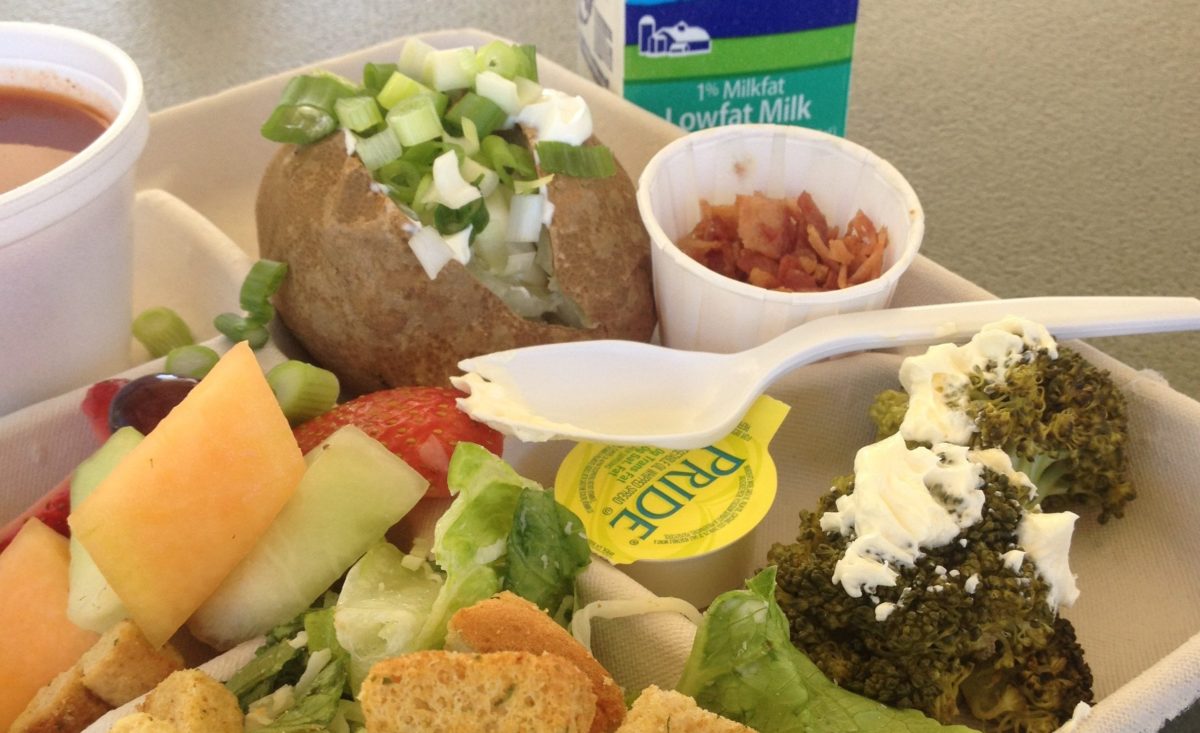 Hello and welcome back to the Ojai School Lunch Monitor! April 22nd was Earth Day and OUSD nutrition services was offering a special lunch at Mira Monte School, so my friend Christina and I went to check it out.  First off, I would like to share a photo of some very sweet artwork of Woodsy the Owl next to a depiction of the Mira Monte elementary school mascot, the noble Mustang, rendered in old mufflers, a much beloved indigenous art tradition around here: 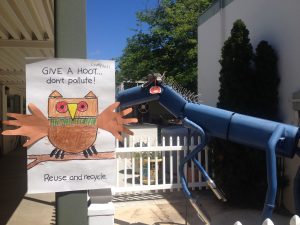 also, I would like to share some spork humor that I found in the LA times last week. It made me wonder if perhaps I am being too intolerant of diversity in the cutlery world.

Today’s special lunch was billed as a baked potato bar.  It was advertised to the parents and in fact I did see a couple dads eating lunch with their kids.   Interestingly, neither dad was actually eating, they were both kind of hanging out while their kid ate. I thought that was a little strange. Either they haven’t been reading my blog or maybe they forgot to bring their $4. In any case, we got our nice hot pre-slitted baked potatoes and some not quite as hot broccoli at the lunch counter along with a bowl of beans that was advertised as chili.  We then headed to the salad bar which had been moved from the cramped little hallway that it is usually in to the nice big airy multipurpose room. 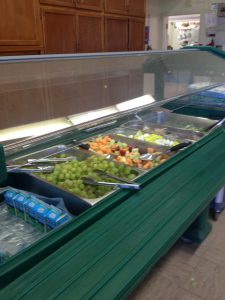 This in itself made the lunch experience so much nicer, because I felt like I could stroll around and actually look at what was there and think about what and how much I wanted to eat. With the usual setup, I always have kind of an anxious feeling of being lined up in a chute and needing to just take something and move along. I took some fruit, some salad and, luckily, also one of the little cups of bacon bits, which turned out to be crucial later. I was puzzling over the little plastic tubs that said “Pride” and was hoping they would be butter, which is what I usually put on my baked potato, so I took two. I also opted for the sour cream which was sitting in a big vat. While the crockpot full of neon orange cheese sauce certainly looked intriguing, I could not think fast enough to decide what I would put it on. Nachos, sure. Potato? I don’t think so, so I skipped it. 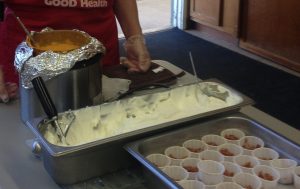 It was time to sit down and dig in. Having slathered my potato in sour cream, I was now looking for some use for the yellow Pride spread which is some type of whipped margarine deal, I believe. I had a devil of a time getting it out of the tub with my spork. I ended up putting it on my broccoli, which was by that time not warm enough to melt the margarine. Waah! Then it hit me: I should have put hot cheese sauce on the broccoli! Oh well, I will have to try that next time. My potato with sour cream, green onion and bacon bits was tasty. It was also the correct size and cooked properly. The Nutrition services staff member shared with us that she had personally sorted through the potatoes and served the smaller ones to the younger kids and the bigger ones to the older kids. This is exactly what we need to make school lunch work: someone who is using her brain and paying attention to details – bravo! My chili, however, was disappointing. It was bland and just tasted like beans in bean juice. I added some left over bacon bits and mixed it with my potato dregs which improved it a little. I had been in such a rush to eat my broccoli, potato and beans while they were still hot that I had to eat my Caesar salad last. I was kind of full by that point, but it was good so I ate it. 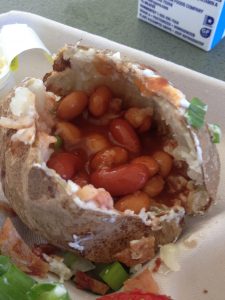 I finished with the fruit salad which was fresh and sweet. All in all, this was a nice way to celebrate Earth Day. I wish more parents were there and that the ones who came had tried the school lunch. Eating food that grows out of the Earth is one of the most basic and tangible ways that we experience our intimate connection with our planet. I know that Food for Thought and the Ventura Farm to School Collaborative have been working with OUSD Nutrition Services to increase the amount of fresh, locally grown and sustainably produced food that goes into our kids’ school lunch. Hopefully next year’s Earth Day will be an opportunity to show off our progress! 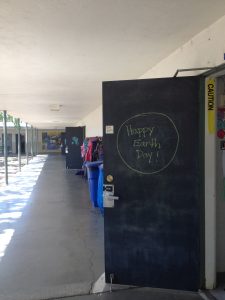